The Best Christmas Movies on Netflix

It has never been more true: in 2020, Christmas vacation is about staying home, forgetting about your problems, and enjoying some quiet days disconnecting from work. And what better way of doing that than curling up on your sofa and watching some movies? Fortunately, thanks to digital platforms like Netflix, there are tons of movies available on demand to brighten up any holiday afternoon or evening. 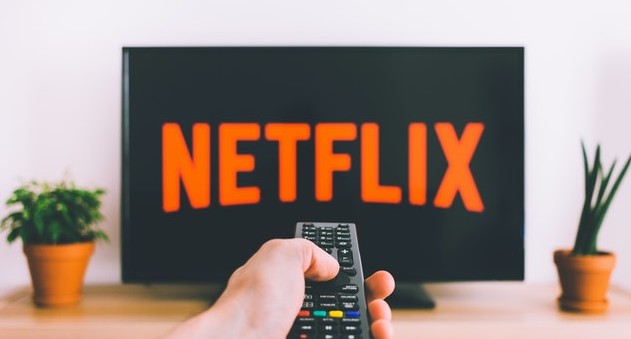 Whether you live alone or with your partner or children, you know full well that Christmas is a magical time when you get to feel like a kid again and recover some of that excitement you’ve lost over the years. The Christmas spirit is irresistible, and although 2020 has put the whole world through a difficult trial, nobody can stop this season from putting a smile back on your face. So why not spend it enjoying a nice selection of Christmas movies?

In today’s article, we have a roundup of the best Christmas-themed movies on Netflix. Yes, we’re aware that they’re not the deepest or most thought-provoking movies in the catalog, but let’s be honest, they’re exactly what we want to watch at a time like this. So go ahead and make yourself some hot chocolate, get your blanket and some good company, because it’s show time!

If you’re a fan of Christmas movies on Netflix, you’ve probably seen The Princess Switch. Starring Vanessa Hudgens (High School Musical), the hit film told the fun story of a baker in Chicago named Stacy and a future princess named Margaret. By a twist of fate, after discovering that they look like twins, and they orchestrate a switch for Christmas reminiscent of The Parent Trap and end up finding love.

The sequel brings us more twists and more Vanessa Hudgens. This time, the popular actress plays not only Stacy and Margaret, but also the evil Lady Fiona. In The Princess Switch: Switched Again, Margaret is getting ready for her Christmas coronation, but first she needs to switch places with Stacy again to get Kevin back. However, her cousin Fiona (who looks exactly like them) has her own plans to steal the throne by posing as Margaret. Intrigue and fun ensue! 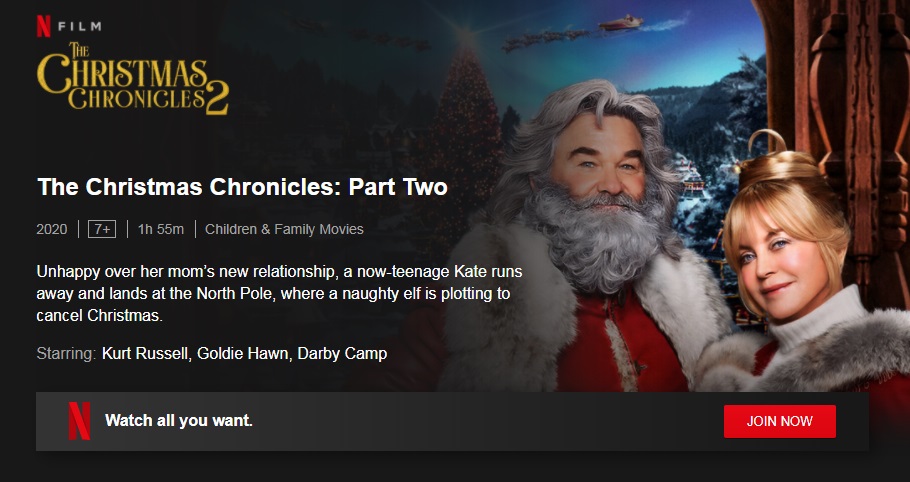 Starring one of Hollywood’s most beloved couples, Kurt Russell and Goldie Hawn, The Christmas Chronicles was one of the best Christmas movies of 2018. It followed siblings Kate and Teddy on their big adventure to save Christmas after nearly ruining it when recording a video of Santa Claus. As you might imagine, this film was a hit on Netflix, and this year we can enjoy the sequel, The Christmas Chronicles: Part Two.

In the second part, we’ll catch up with the Pierce siblings, but they’re nothing like we remember them. Now Kate is a moody teenager who shuns Christmas and wants nothing to do with the holidays. After running away from home, Kate is transported to the North Pole, where she’ll have to save Christmas once again along with Santa Claus and Mrs. Claus. 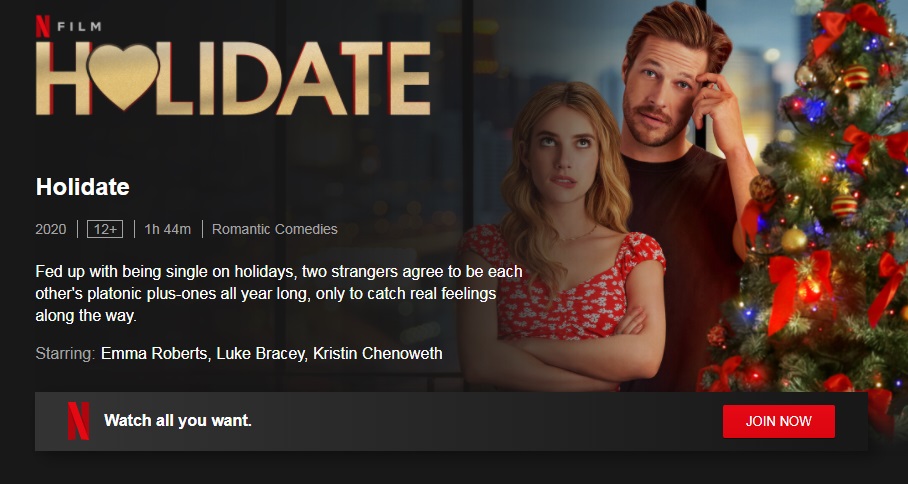 Holidate is a fun romantic comedy that will delight fans of the genre. The film tells the story of Sloane (Emma Roberts) and Jackson (Luke Bracey), two young people who are sick of the holidays because they’re single and have to put up with judgment for not being in a relationship. After meeting at a Christmas party, they make a deal: to avoid going stag, they’ll be each others’ “holidates” over the coming year. As you can imagine, a lot of comedy ensues!

Full of hilarious scenes and truly funny situations, Holidate invites you to join Sloane and Jackson for all of the holidays and watch how something slowly develops between them. And you can probably guess how the year will end.

Dolly Parton’s Christmas on the Square 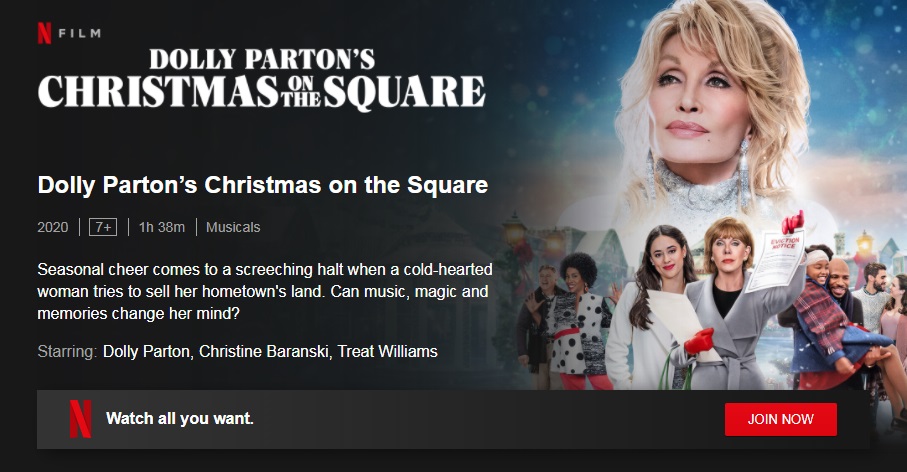 Country music’s most voluptuous singer is back to wish you a Merry Christmas in Dolly Parton’s Christmas on the Square. This entertaining musical tells the story of Regina Fuller (Christine Baranski), a ruthless woman who tries to sell a town to a large corporation. The residents of the small town must leave their homes by Christmas Eve, ruining the lives of these families and spoiling their Christmas. However, something happens to Regina that she could never have imagined. An angel (Dolly Parton) appears to her, and with her songs, tries to turn this scrooge into a better person.

Based on the famous A Christmas Carol by Charles Dickens, Dolly Parton’s Christmas on the Square gives a fresh twist to a story we all know, turning it into an entertaining musical. Will Dolly save the town with the power of music? Find out this Christmas!

Jeronicus Jangle (Forest Whitaker) is the most incredible toy maker and inventor who has ever lived. His toys seem to come alive, and they’re capable of bringing joy to any child or adult on earth. However, when his apprentice steals his latest creation, Jangle falls into a depression and loses the joy of making toys. Fortunately, everything changes when Journey, his granddaughter, a clever young lady who’s as inventive as her grandfather, arrives at Christmas.

Jingle Jangle: A Christmas Journey is a beautiful musical full of rhythm and magical moments that will delight viewers young and old. In fact, the film is full of cameos by stars like Ricky Martin, Usher, and John Legend. Don’t miss it! 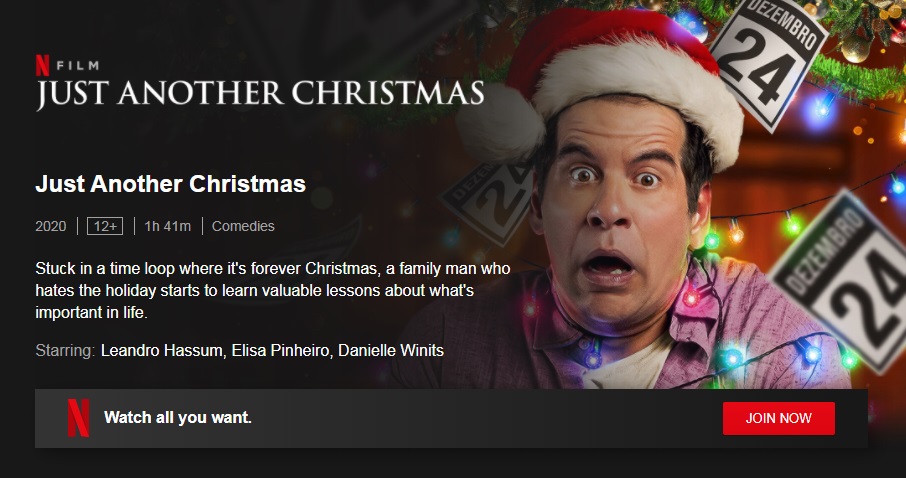 If you like the classic film Groundhog Day, we promise you’ll love Just Another Christmas. This funny Brazilian movie introduces us to Jorge, a man who, after an accident the day before Christmas, enters a terrible time loop where he must relive Christmas Eve. However, Jorge’s Christmas Eve won’t always be the same: each one takes place a year after the previous one, skipping over his life in between, of which he has no memories.

Just Another Christmas is an original film that perfectly mixes comedy with sweet and dramatic moments. As Jorge’s bizarre Christmas Eves fly by, he’ll learn important lessons about what really matters in life. We highly recommend it.

WATCH JUST ANOTHER CHRISTMAS ON NETFLIX 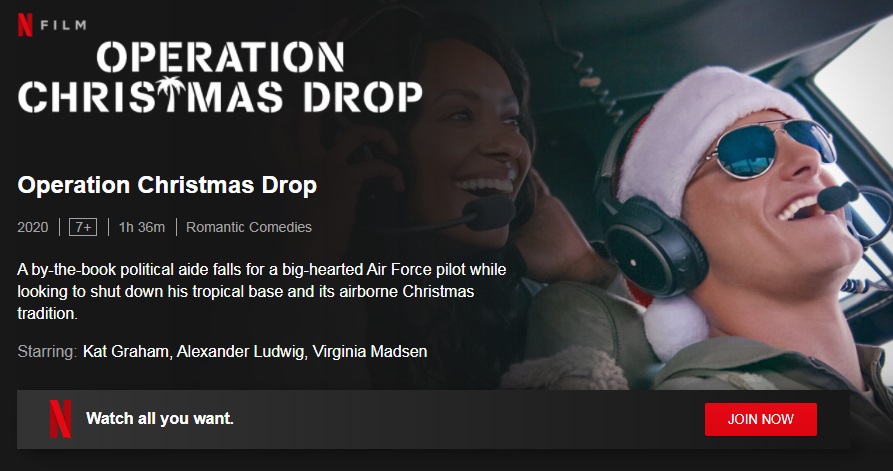 Operation Christmas Drop is the perfect romantic comedy to watch if you’re looking to spend a fun afternoon with your partner. It follows the adventures of Erica (Kat Graham), a congressional aide who visits an Air Force base to find evidence to support its defunding. There she’ll meet Captain Andrew Jantz (Alexander Ludwig), a roguish young man who knows that his base is in danger with Erica’s visit. However, Erica’s Christmas visit won’t go as they expected, because unbeknownst to them, they have a date with love.

Fun, entertaining and full of downright funny moments, Operation Christmas Drop is one of those films that will put a smile on your face. 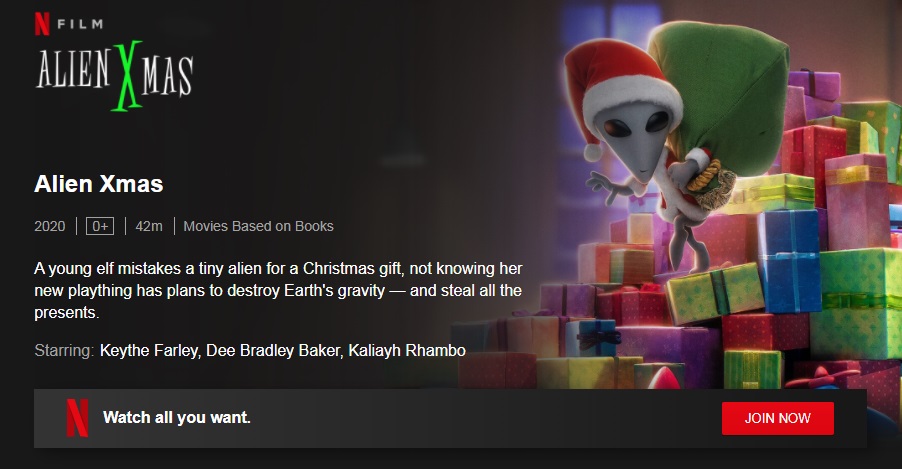 If you have kids, Alien Xmas is a great movie to keep them entertained. Created with the stop motion technique, this cute animated film introduces us to X, a funny alien who will help Santa Claus and his elves save the world and Christmas from his fellow aliens, who want to steal the Earth’s gravity in order to quickly obtain everything on it.

Full of laughs, Alien Xmas is the perfect movie to watch on Christmas Eve. Because what better way to pass the time while waiting for your Christmas presents than watching a good movie?

The Knight Before Christmas 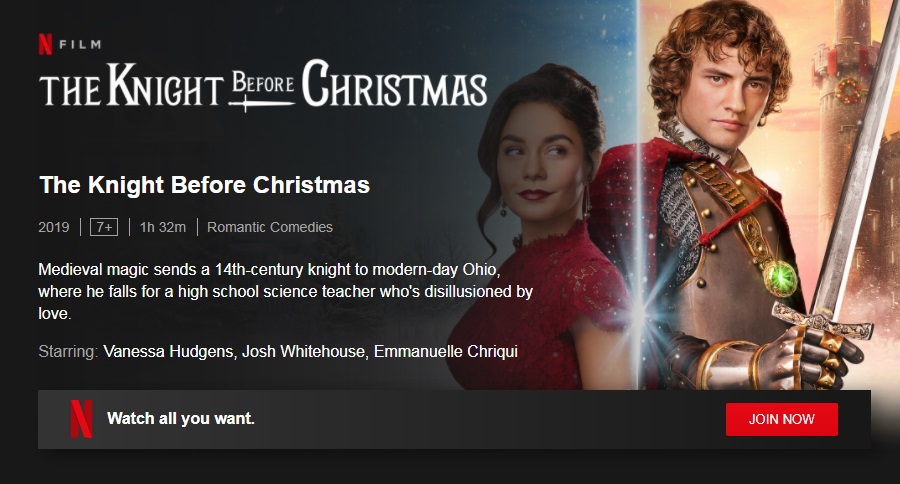 Vanessa Hudgens is back in another Christmas film loaded with romance and time-space travel. The Knight Before Christmas is an entertaining movie in which a medieval British knight named Sir Cole (Josh Whitehouse) is sent by an evil witch to the Ohio of the future. There he is hit by a car driven by Brooke (Vanessa Hudgens), a teacher who doesn’t believe in love but won’t hesitate to help the knight, assuming that he’s suffering from amnesia. What she doesn’t imagine is that he’s literally her knight in shining armor!

Full of romantic-comedy clichés, The Knight Before Christmas is the perfect film to watch if you’re looking to spend a fun Christmas afternoon with your partner. The wacky situations involving this unlikely couple will definitely have you laughing!

We hope you liked our selection of Christmas movies to watch on Netflix. Is there a movie you’d like to recommend to us? Tell us about it in the comments section!

The Best Familiars in Lords Mobile